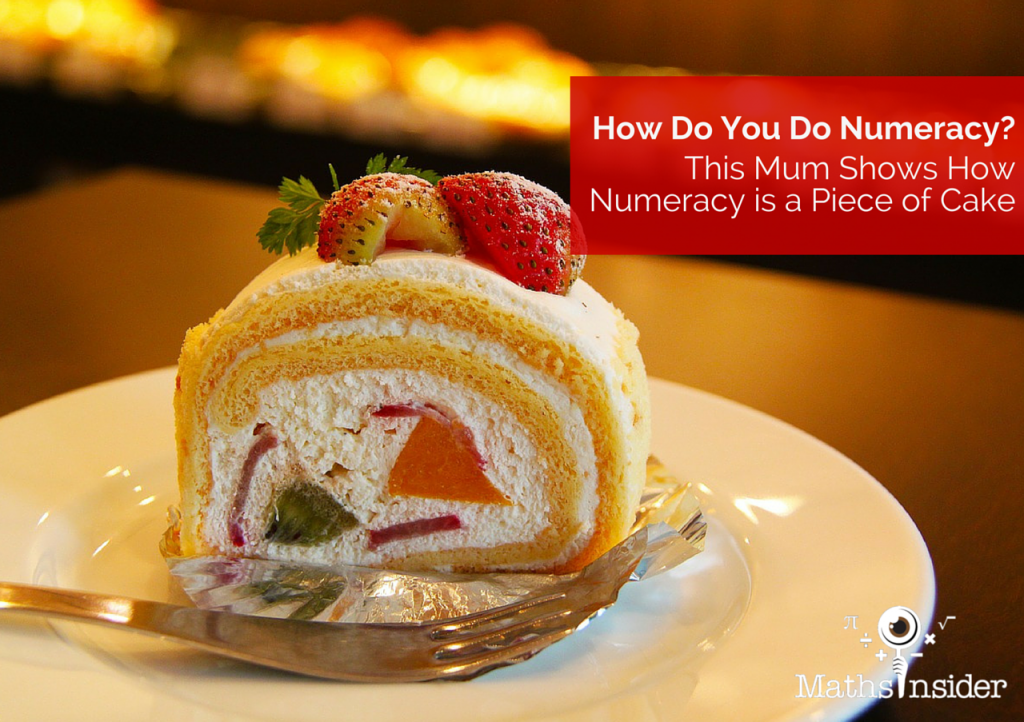 This is a guest post by Nicky Wells, author of the contemporary romantic novel Sophie’s Turn

Numeracy is a Piece of Cake

…or a piece of fruit, as the case may be.  Getting young children to practice their numeracy at home can be a real challenge.  Making it fun can seem impossible.  Yet, I’m discovering with the help of my own two boys (in Year 2 and Reception respectively), if you take their lead… and are willing to improvise on the hop… supporting their numeracy learning can be a piece of cake.  Or fruit, as it were. I recently retrained as a teaching assistant, taking a course with the Open University called Supporting Learning in Primary Schools.  One of the most valuable insights and practices I gained from this course was using play, in whichever way possible, as an avenue for my children’s learning.  So, for example, this morning… Over breakfast, my six year-old idly asked me, “Mum, what’s a percentage?”  Initially I nearly missed the opportunity.  I was too busy thinking about the day ahead, and I hadn’t realised what he was asking me.  Then I noticed that he was reading the back of his smoothie packaging, and he was obviously intrigued by the numbers and the pictures. “Right,” I said.  “Percentage.  Well, that means something like ‘parts per hundred’.”  Oh dear God, how to go on?  A light-bulb went on in my head, and I had a carpe-diem type moment.  Inspired by the source of his question, I grabbed all the fruit out of the fruit bowl and lined it up on the table.  I had my four year old count it for us, to get him involved, too.  We had eight apples, one banana and one horse chestnut (well, I needed ten units of some description, didn’t I?).  Moreover, the apples fell into two categories:  three red ones, and five green ones.

So far, so good.  We did a little bit of counting in tens, whereby each piece of fruit represented ten.  You get the idea… I was building up to ‘parts in a hundred.’  When I was certain that they had grasped that the collection of fruit together represented 100, with each piece standing for ten, we tackled the percentages.  I touched an apple and said, “How much is this again?”  My four year old immediately came in:  “Ten.” Sound easy?  It was.  It really was!  Then came the trick question:  “How much of this collection of fruit is apple?  In other words, what percentage do the apples represent here?”  Short moment of reflection, then my six year-old started counting the apples again (in tens), quickly joined by my four year old:  “… sixty, seventy, eighty.  Eighty per cent, Mum!”  I kid you not!  This is exactly what happened.

Ok, let’s extend their learning further.  “Take a look at the apples.  What percentage (of all of the fruit) is green?”  More counting, then the quick answer:  Thirty per cent.  And so on.  At the end, when I asked my six year-old what a percentage was, he said ‘parts per hundred.’  That’s probably not the text book definition, but it works for us, for now.  Last but not least, we looked again at the smoothie packaging.  Thinking back to what he’d just learned, my six year old quickly worked out that, had the smoothie been made from 100 pieces of fruit, 36 of them would have been bananas (36 per cent), 33 of them apples (33 per cent), and so on.  What a great way to start the day!

Bizarrely, we ended the day in a similar manner.  My six year-old again, over dinner:  “What’s the difference between a half and a quarter?”  This time, I was a little quicker off the mark by way of a playful explanation.  We had one enormous carrot stick left over, so I encouraged him to cut that in half.  So, half is two equal bits.  Now, cut the halves into half again.  Oh… ok.  We end up with four pieces, or quarters.  Two quarters make a half, and two halves make a whole, or one.

Once again, this may sound incredible, but it was so obvious to him, sitting there, with his knife, making halves, quarters and, eventually, eighths.  (It really was a long carrot stick!).  We talked about what happened every time you halved… namely, that the ‘fraction number’ (again, not a technically correct term but it served the purpose for today) doubled.  He checked and double-checked that a few times, re-configuring the carrot stick and taking it to bits again.

Will he remember his fractions tomorrow?  I don’t know.  But he will remember working them out with a carrot stick, and that may well give him a bridge into learning fractions when he needs it. Now, you wonder, does this woman do numeracy at the dinner table every day?  Of course not.  But what I’m trying to share is the insight that children are curious about numeracy at times and in ways that we least expect.  And when that happens, it doesn’t take much to create a learning experience ‘on the hop’ that answers their question, embeds their learning and makes you… well, feel like a super-mum, frankly.

Nicky Wells is a mum of two primary-school age children.  She lives in Bristol (UK) withher family and works as a teaching assistant for the German Saturday School in Bristol.  She also performs voluntary teaching assistant work at a local primary school.  Moreover, Nicky is a writer and independent publisher.  Her contemporary romantic debut novel, Sophie’s Turn, is available in Kindle edition from Amazon.co.uk and Amazon.com

About The Author: Caroline Mukisa is the founder of Maths Insider. A Cambridge University educated math teacher, she's been involved in math education for over 20 years as a teacher, tutor, Kumon instructor, Thinkster Math instructor and math ed blogger. She is the author of the insanely helpful ebook "The Ultimate Kumon Review" and insanely useful website "31 Days to Faster Times Tables" You can follow her math tips on Facebook and follow her on Twitter @mathsinsider
Share | Tweet | print | email
Categories: Preschool Ideas, Resources

4 thoughts on “How Do You Do Numeracy? This Mum Shows How Numeracy is a Piece of Cake”