Hello, I’m Caroline Mukisa from mathsinsider.com and today I’m going to talk about a question from a Maths Insider reader and they asked, “How can I keep talking about math and try to encourage my child about maths and everyday maths if they’re just not interested?” So I’ve got three tips for you here.

No.1:  Great! Fantastic! It’s really good that you’re doing that and carry on doing it! Keep on doing it, because one day they might change their minds. I’ll give you 2 little examples to illustrate this:

When I was a child I hated avocados and my dad use to go on about how amazing avocados were, how tasty they were, how healthy they were, all the vitamins and minerals they had in them, and now as adult I really like avocados and I can think back and remember all the good things about the avocados and as my taste matured, as I got older I can then see that yes, this was a worthy fruit to enjoy. So keep on talking to your child about maths because you never know when their taste might mature and they might remember some of the things that you mentioned.

The other example is: my 6 year old is really into Lego Ninjago and I used to just always think, he’s watching Lego Ninjago again that’s just a load of rubbish, it’s just some silly cartoon, but actually I sat down with him one day and asked him all about it. I said, “So, who is this character? Is this character good? Is that one bad? Why are they doing this and what have they done in the past?” and he was actually able to explain it to me, and from him giving an explanation, I can actually understand why he likes it, and I can see some of the interesting characters and some of the interesting plots that they used. So again your child might say “Aargh! Mum or Dad are talking about maths again!” but one day they might actually think, “But actually I remember when they pointed out something interesting about maths and they were right.” So keep on doing it. 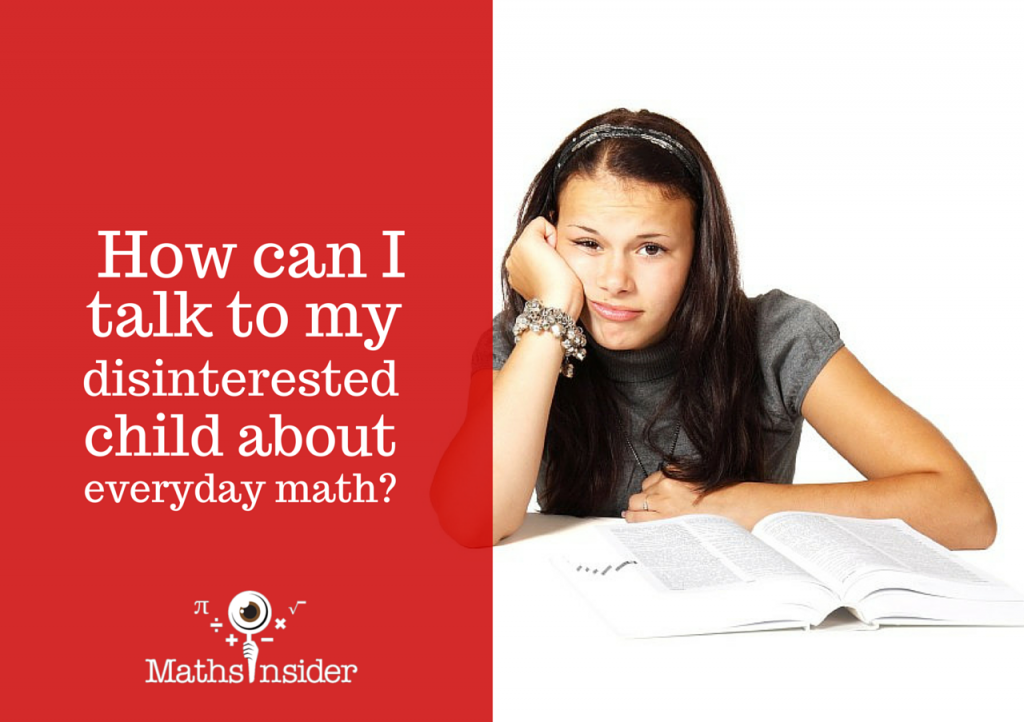 Relate math to what interests your child

The next thing is actually to relate the maths to what they are actually interested in. So you might be pointing out some interesting chart in the newspaper or some maths to do with grocery shopping, but actually if they are into horses, you can talk to them about how vets use maths. If they are into Minecraft, you can talk to them how maths is used in computer programming a lot and maybe sign them up for some computer programming courses. There are some really good ones on Hour of Code. There are other courses where you can actually learn how to program mods in Minecraft, so that’s worth looking at. Also I found something nice –  Pixar Math – so they’ve got together with Khan Academy and they’re explaining how maths is use in Pixar movies and the animations and that’s sort of really interesting as well. So try and find out what they are actually interested in and try and relate that to maths.

Discuss how math can help in future careers

The next thing, the last tip is to actually ask them about what their future plans are. Now I guess this will change depending on how old they are, so you’ll get a different answer depending on whether you ask a 4 year old to or whether you ask a 14 year old. One of my students was very reluctant to do extra maths, he was struggling a bit with maths at school,  he was very reluctant to do any extra maths and his mum actually said to him, “Well what is it that you want to do when you grow up?” and he said, “I want to be a car designer.” I think it’s for Audi, and she said, “Well, why don’t you write to Audi, go and email them and ask them, “Do you need maths to be a car designer?” and he did. He emailed them and he got a reply and they said, “Oh yea, you definitely need lots of maths, we look for strong mathematicians when we’re looking to employ people to be car designers” and then he was a little less reluctant and a little more willing to do extra maths and he is coming along quite nicely.

So ask your child what they want to do in the future. I guess for some things, if they want to be a dancer or an author it not easy to immediately think of things, but whatever profession, if they’re going to earn money they’re going to need to know how to handle the money, especially if something in the entertainment business, there are agents to pay and agents who are looking to rip you off. So there is always a link to maths in whatever their future ambitions are.

About The Author: Caroline Mukisa is the founder of Maths Insider. A Cambridge University educated math teacher, she's been involved in math education for over 20 years as a teacher, tutor, Kumon instructor, Thinkster Math instructor and math ed blogger. She is the author of the insanely helpful ebook "The Ultimate Kumon Review" and insanely useful website "31 Days to Faster Times Tables" You can follow her math tips on Facebook and follow her on Twitter @mathsinsider
Comment0 | Share | Tweet | print | email
Categories: High School Resources, Motivation, Primary and Elementary Resources