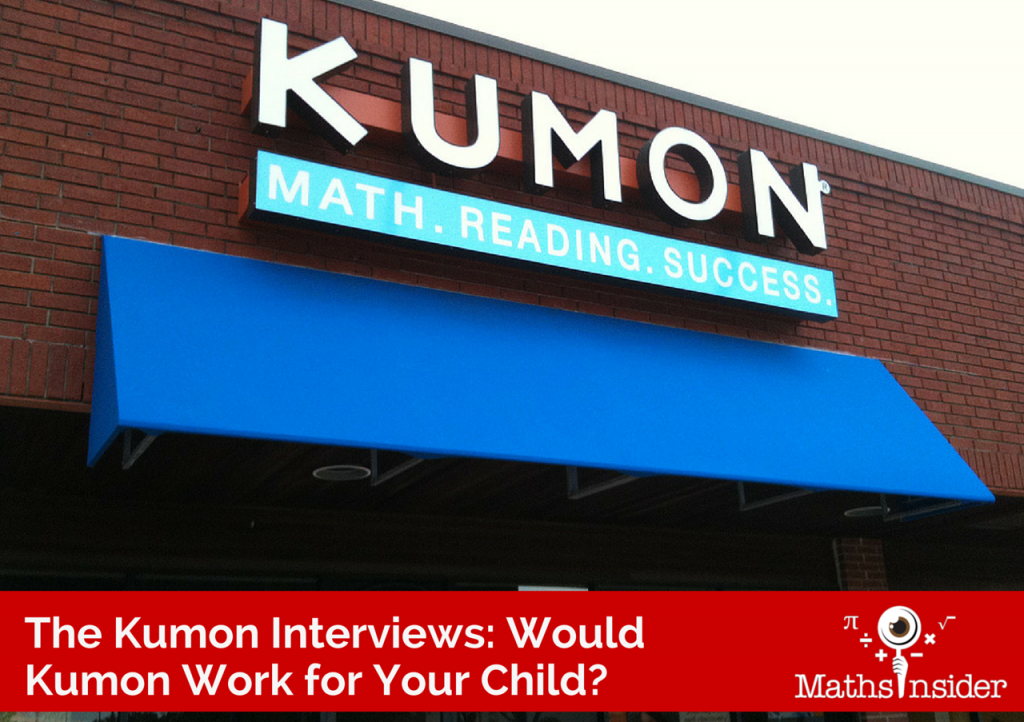 At the start of the school year, parent’s attention starts to focus on ways to help their children make the most of the academic year.  When it comes to after school maths programs Kumon with 4 million students currently studying their maths and reading programs is LARGE!

Recently, while researching what makes  Kumon work well for some families and not so well for others, I had the pleasure of interviewing people who have had experience of the Kumon program. See what people are saying about Kumon in the extracts from 3 of the interviews below!

Andrew Schrage is the Editor of the Money Crashers personal finance site and studied on the Kumon program for 10 years as a child.

Jacquie Lewis-Kemp’s son started the Kumon program when he was in Kindergarten. She is the author of the book Blessed Assurance: Success Despite the Odds

1) Do you think the Kumon program improves mental maths skills?

Andrew: Yes, my mental math skills are very good and are often superior to other people who may be excellent at math, but are slower, especially when it comes to quick division or multiplication questions (or those brain teaser games that test speed on smartphones).

Josie: I actually thought the “Kumon method” would be detrimental to him.  He would know 2+1 = 3, but would not understand the “why”

2) Does Kumon help with school maths?

Andrew: I did do well at math at school.  There was certainly a point, however, where Kumon (probably because I didn’t make it to the end) stopped helping me as much as the math level in school became very advanced. My current job, as editor and contributor at Money Crashers, involves math to the point that we try to explain financial concepts in simple-to-understand terms, which often involve mathematical examples.  For example, trying to use helpful examples when explaining call and put stock options.  I also use math just to understand basic business and economic events, which I also sometimes apply to our stories. I even use it when I’m shopping and trying to implement extreme couponing, to figure out which coupons I can use and how much I will save.

Jacqui: The benefit in the classroom was that he always did math homework first because it was something he knew he could complete quickly and perfect.

Dr Mary: Kumon helps children succeed in school math because of their improved study habits, confidence, and self-esteem. Math, like any subject, requires practice, and at Kumon students practice their math ability daily and develop their capabilities to the fullest extent to prepare them for high school, college, and beyond, so that they can be global players in the marketplace.

3) Is it true that Kumon is boring?

Andrew:  Yes, I did definitely find the repetition boring.  But, at the same time, my improvement was extremely exciting.  As I got better and better, it became less and less boring.

Jacqui: Great question! Yes, he found it boring many times. His grandparents even tried to talk us out of it because he “hated” it so. We insisted he continue–we never told him when the end would be, we didn’t know when the end would come. Our son later thanked us as he noticed himself excelling in high school, after Kumon was over.

Josie: Yes! Im a mother of 2 who used Kumon math but then stopped.  Dissatisfied.

Dr Mary: You’ll have to interview our North American students, however, I’ve worked in Kumon for more than 12 years now – and have traveled to many countries around the world – and kids from New York to the Philippines are children, and naturally, at times, would rather be outside playing than studying.

4) What do you think are the characteristics of a successful Kumon family? Andrew: I would say hard working and determined. If you can’t stick with it and stay disciplined, it’s not the right program for you.  You have to be willing to overcome challenges and obstacles along the way.

Jacqui: Routine and work ethic. To create an expectation of “extra work”

Dr Mary: Kumon is extra work, and requires discipline and daily praise and support from parents. Since much of the work is completed at home, parent involvement is critical to a child’s success in Kumon. Kumon’s academic enrichment program is integrated into the daily family routine so students can grow and nurture their natural ability.

So tell me what you think! Is Kumon boring? Does it help with school maths?

If you’re a parent trying to make the decision about whether Kumon is right for your family? Check out Maths Insider’s Ultimate Kumon Review

About The Author: Caroline Mukisa is the founder of Maths Insider. A Cambridge University educated math teacher, she's been involved in math education for over 20 years as a teacher, tutor, Kumon instructor, Thinkster Math instructor and math ed blogger. She is the author of the insanely helpful ebook "The Ultimate Kumon Review" and insanely useful website "31 Days to Faster Times Tables" You can follow her math tips on Facebook and follow her on Twitter @mathsinsider
Comment0 | Share | Tweet | print | email
Category: Kumon