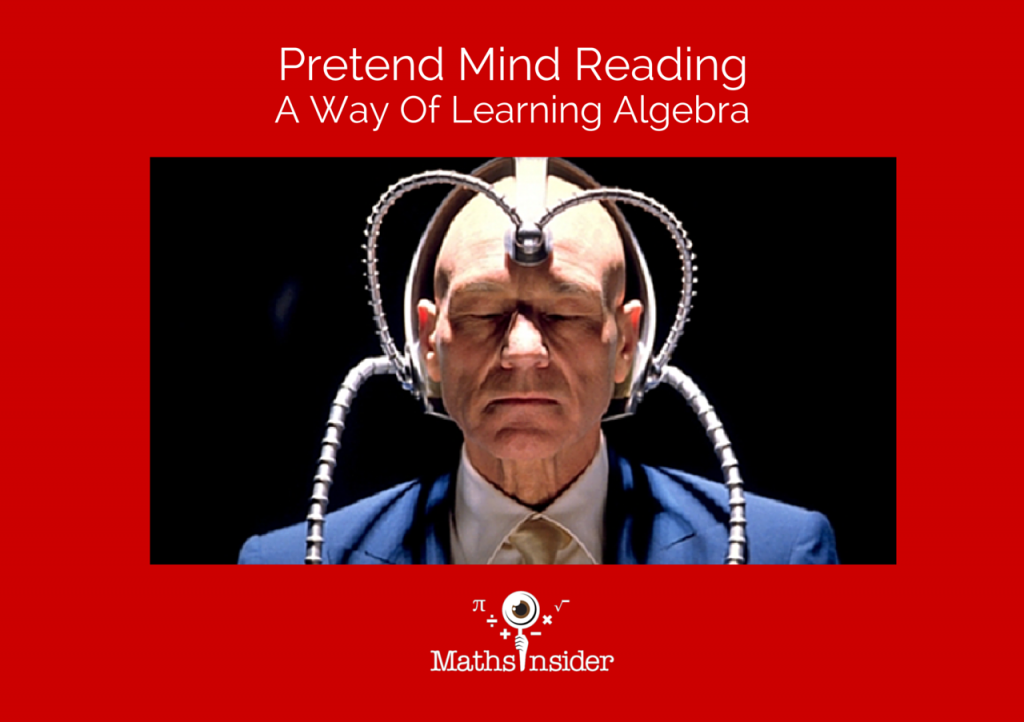 Here’s a way to pretend you read someone’s mind.

It’s also a way to get familiar with algebra.

I want you to do some calculations for me, are you ready? 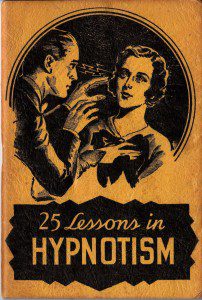 Well it should be, if it isn’t you made a mistake!

Lets try another one.

The reason I keep it between 1 and 5 is because if you try this on someone who’s not so good at arithmetic, and they make a mistake, then it backfires on everybody, so keep the numbers small, many adults make mistakes on this, and younger humans too.

Lets do one more, to show you more how the numbers can be varied each time, in fact you can make these up as you go along, which is what I am doing at this moment.

I often teach this at the beginning of learning algebra, partly as a way of entertaining my students, why not have fun learning?

We start off with a number we don’t know. Now in algebra, its actually useful to have a way of referring to something we don’t know. It might seem strange to you, but that’s what we do. This is a stage removed from maths so far, which we now refer to as arithmetic. Algebra is a kind of maths where we deal with not only numbers that we know like 6 or 3.2 or a quarter, but also numbers we don’t know (at least not yet). We use letters, often x, or another letter.

In this number trick, I think “x” when I consider your chosen number, and when I ask you to double the number in the first one, I don’t know what number you have now, but I do know that whatever it is, its twice the number we started with, so at this point in the trick we have

twice the number we don’t know. We still don’t know what it is.

Then I ask you to add 10. In algebra we represent this as

We still don’t know what the number is at this stage, but we do know, that whatever it is, it is twice what you started with, with 10 added on extra.

Now this is clever because no-one really notices that the 10 and the 5 are connected (unless they know the trick), so we now take away the number you started with, which is the x, and guess what – you’re left with…

No matter what you started with, any uncertainty has now been removed. We now know exactly what the number you finished with is.

That’s how the first one works.

Now, lets look at the other 2 versions I created. Again you think of a number between 1 and 5, we write

A number we don’t know.

I’m very fond of this little phrase I tell my students, it makes them laugh (and me too). x is a number we don’t know, but we can still talk about it, even though we don’t know what it is!

Its easy to forget what x and these letters mean, we can end up with a pile of mumbo-jumbo and turns into a lot of nothing, if we forget the richness and clarity of what we’re doing.

Then I ask to multiply by 3, because I don’t know what the number is, (in fact you could have a whole roomful of people with different numbers). Its now three times the number you started with.

Then, we say take away the number you started with, (the x), and your answer is

Give people plenty of time to do this, as you’re trying to impress people, particularly people who don’t know the trick, you want to make sure the answer comes out right, because if someone sees this for the first time they can get a real fun shock at this point.

Lastly, again you think of a number between 1 and 5, we write

Then, we say take away the number you started with, (the x), and your answer is

I hope that clarifies this trick, what you have to realise is that the number you multiply and divide by must be the same – 5 in the last case – otherwise its not going to come back to x at the end. The number you add on needs to be a number that that number goes into – in this case 10 must divide by 5, you couldn’t add 11 and have the answer come out to be a whole number.

You must always remember to take away the number they started with at the end. It may help to remember you have one of each of the 4 operations, a times, a plus, a divide and a minus, in that order.

For more clarity see my video on this trick:

Mind Reading by Algebra from Lawrence Ball on Vimeo.

If you havn’t seen this before I hope you found this interesting and fun, and hopefully now, or soon (you could always reread to clarify) you can play this trick on your friends and family, and even better your maths teacher which might impress them no end, and may even cause a creative diversion in the classroom.

Lawrence Ball is (http://www.lawrenceball.org) a long-term maths tutor (but also composer and musician), with a history of helping with motivation and difficulty, as well as with maths material. He has tutored privately including extended royal family, and all 4 children of Lady Helene Hayman, and has had big success in helping pupils with dyslexia.

He has developed ways to teach basic arithmetic which are innovative, and that promote relaxed concentration. He lives in North London.

About The Author: Caroline Mukisa is the founder of Maths Insider. A Cambridge University educated math teacher, she's been involved in math education for over 20 years as a teacher, tutor, Kumon instructor, Thinkster Math instructor and math ed blogger. She is the author of the insanely helpful ebook "The Ultimate Kumon Review" and insanely useful website "31 Days to Faster Times Tables" You can follow her math tips on Facebook and follow her on Twitter @mathsinsider
Share | Tweet | print | email
Categories: High School Resources, Mental maths, Motivation, Resources