“How can he be 13 years old and not know long division? How did that happen?”

That was an actual quote from a distraught parent whose child had just done “not so well” on the Diagnostic Test that Thinkster Math (formerly Tabtor) gives to all new students. It’s often the case that students struggle with a topic because they’ve either not had the chance to practice easier concepts or missed learning an easier concept entirely. So for this student, it may be that his times tables recall is weak or he’s making mistakes in subtraction or he just hasn’t learnt how to set out his log division work.

Math, like reading needs to build up from strong foundations.

Find out which foundationnmath skills your child should learn first with this video. The transcript of the video is also below. Click here to watch the video on You Tube “complete with subtitles.

Hello, I’m Caroline from www.mathsinsider.com and today I am going to answer a question from a Maths Insider reader which is, “Which math skills, and how to know which math skills my child needs to learn first?”

A logical order of math skills 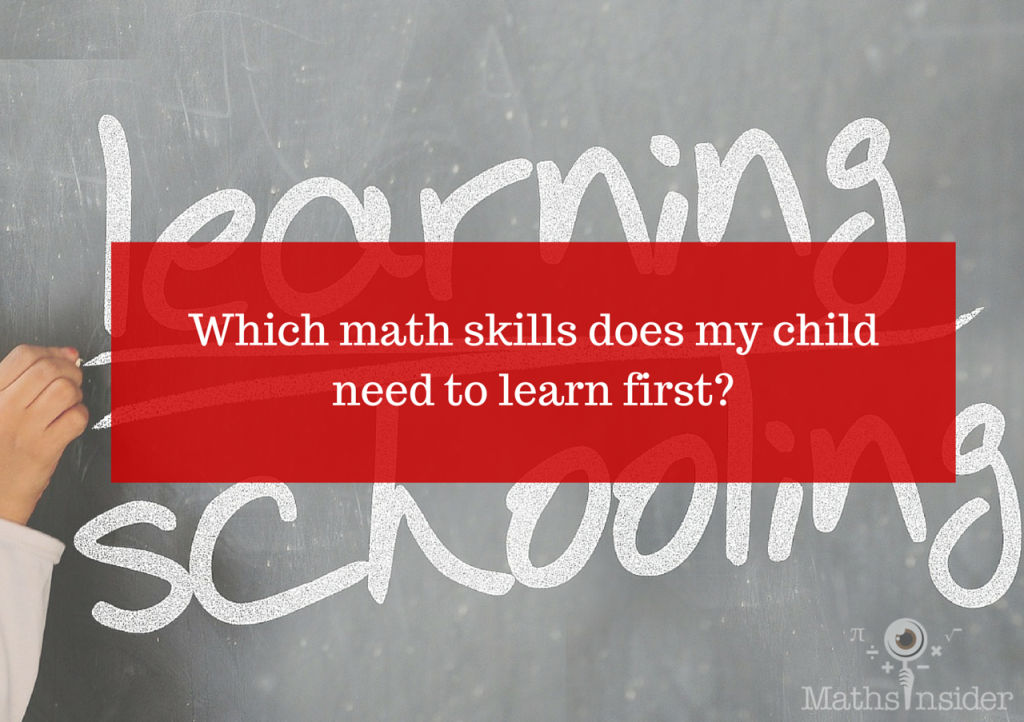 How Kumon Does the Math

A program like Kumon, what they do, they do, they basically do addition, addition, addition, 1 digit, 2 digit, 3 digit, 4 digit, yes they add and then subtract, well  they do addition and subtraction together, a bit of addition  a bit of subtraction, a bit of addition a bit of subtraction and then only after addition and subtraction are perfect for like 4 digits, plus 4 digits, and 4 digits, take away 4 digits, do they do the multiplication tables and then once they know those then they do the division facts and then short multiplication, short division, long multiplication, long division and so that’s how come Kumon students are able to seemingly move forward very quickly whilst the school will be doing all these things in a broken up way because then they have also fit in shapes and measurements and time and angles and all the other things that the curriculum decides.

But how does this help you as a parent when your child comes home with for example a question on dividing fractions?  So when I first meet a new student and the parents say they’re stuck on dividing fractions, first of all I want to know do they know their times tables. Well actually I want to know can they add and also subtract but it’s kind of more polite to say, “Do you know your times tables?” especially when you’re talking to a child who maybe 12 or 13 years old and often times they are really hesitant, they don’t know them. It is not a case of being really fast, a fraction of a second, they must know the answer straight away, but they should be able to give you the answer within a few seconds and not panic. So in order to access that dividing by fractions, they are going to need to be able to work with the times tables relatively quickly and relatively comfortably, so it is a case of making sure all the foundation skills are built up. So if you do have your child coming to you with a question to do with fractions make sure they do know their times tables and also before that make sure they do know their addition and subtraction fact relatively easy and not having to count on their fingers and their toes and your fingers and your toes. So it is actually worth taking the time out to do that.

Often times I have parents who starts working with me and I start working with their child and they said well, they need to know their times tables which is fine I can give them lots of time tables practice, but actually they do need to be able to do the column subtraction because later on when they are doing  long division they’re going need to be able to subtract easily and accurately and times tables aren’t  actually that difficult to learn, they just need a concentrated amount of time and they don’t even need to be quick, quick, quick as I said before.  It’s the case to get the 4 times table, double and double it again and figuring out. Give your child the tools if they can’t memorize them then give them the tools to be able to get answers so that when later on they’re doing the long division, they are not having to count on to figure out how many times does four goes into 28. Then also they’ve got the problem they can’t subtract accurately, so they are making mistakes when they have to do the subtraction bit of the long division. So it is very important to make sure your child has all their foundational skills and it’s not that they have to be super speedy, that’s great if they can be, but they just need to be comfortable.

About The Author: Caroline Mukisa is the founder of Maths Insider. A Cambridge University educated math teacher, she's been involved in math education for over 20 years as a teacher, tutor, Kumon instructor, Thinkster Math instructor and math ed blogger. She is the author of the insanely helpful ebook "The Ultimate Kumon Review" and insanely useful website "31 Days to Faster Times Tables" You can follow her math tips on Facebook and follow her on Twitter @mathsinsider
Comment1 | Share | Tweet | print | email
Categories: High School Resources, Kumon, Mental maths, Motivation, Primary and Elementary Resources, Problem solving, Resources, Tutoring

One thought on “Learn These Math Skills First!”