Watch the video on You Tube here

Read the transcript below:

4 Tips to Help Your Child Learn Their Basic Math Facts

Hello, my name is Caroline Mukisa from the Maths Insider website and today I’m going to answer a question from a Maths Insider reader, “How can I get my child to learn the basic facts?”

Will learning the basic math facts take a lot of effort? 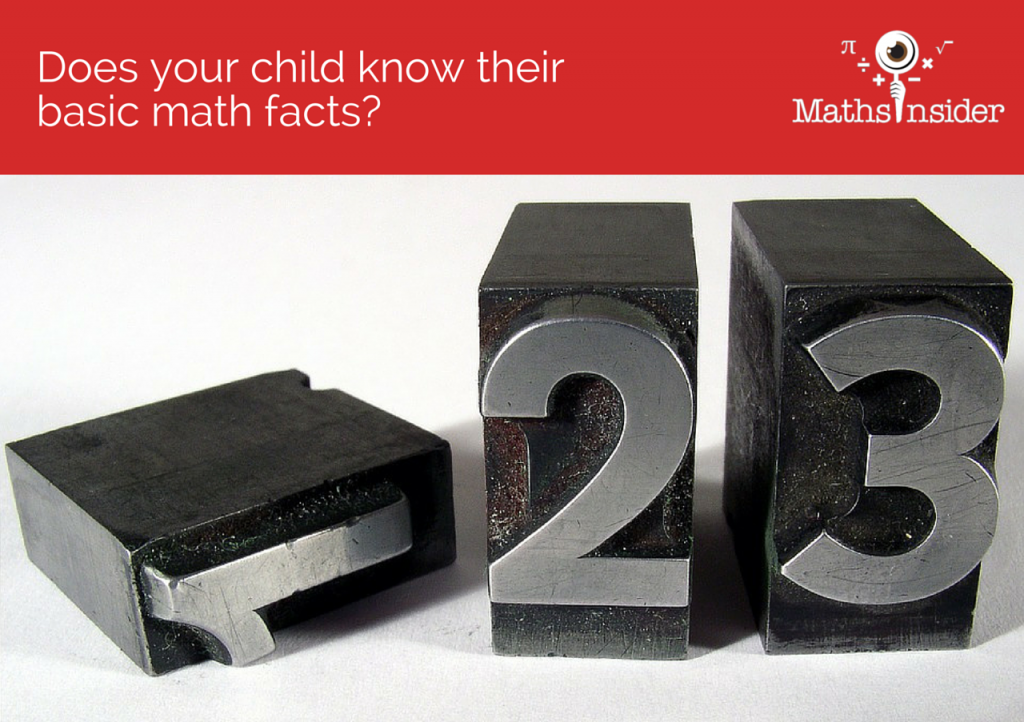 So first of all, how much effort is it going to take? Well, when I was a Kumon instructor, when I ran a Kumon center in London, my students were doing a lot of basic facts learning. So on the typical Kumon worksheet, say for example addition and subtraction, each student would be doing about 200 to 300 questions every day on that particular fact whether it’s +1s or +2s or a mixture of +1s and 2s. So that’s why Kumon kids are generally really, really fast in their basic arithmetic.
Now, I don’t do that with my own kids now and as a Thinkster Math (formerly Tabtor) instructor, each Thinkster Math worksheet has about 30 questions for the arithmetic section which is fine and some kids do two or three in a row so I guess they did 90. But to be frank, even if you can get 10 questions done or 5 questions done, or a few questions done several times a week, that’s brilliant, that’s better than doing nothing, okay? So don’t have in your head that this is going to be a huge, humongous task.You know, obviously if you want your kids to be really, really fast you’re going to need to put in some Kumon effort, some Kumon style effort. If you want them to be quite fast then put in some Thinkster Math effort and if you just want them to get the basic facts, then just do 10 questions several times a week.

Learn the basic math facts in this order

The next thing I’m going to go over is what order should you ask the questions? So I’ve got my whiteboard over here. So I’ve kind of got the 4 times tables, that my son was doing last week. I wrote them in order first, then in order again, and then in the next row I kind of skipped some and just wrote the odd number and then the even number times tables. So generally, try to do them in order. I would start with something that’s really easy. So if you know they’re struggling with their four times tables, start off with the two times tables. Give them that confidence by starting at an easier starting point.
So if you notice, for example, for addition, that they’re finding 8+5 difficult. (That 8+5 is the question I always ask my new Thinkster Math students. “What’s 8+5?”) If they can give me that quickly, then I know their arithmetic is generally okay. That’s just one of those facts that takes me a fraction of a second longer to get, so that’s why I picked 8+5. So if they’re struggling with 8+5, then give them an easier starting point. You could start with even the +1s and +2s and +3s and just give them the confidence to go fast. If they can do 9+3 quite quickly, then the leap from 9+3 to 8+5 isn’t that huge, but give them a running start, give them some easy work to get started with. 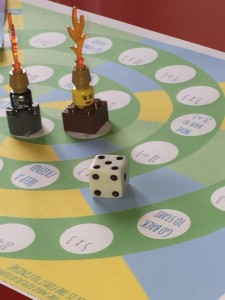 Taking my own advice from my Faster Times Tables website – use games to reinforce the times tables. Game board printed from the Twinkl website and LEGO game pieces custom built by my 8 year old!

The other thing I want to talk about is where should you do them. Well of course, you know, you’re probably thinking I’m going to sit in front of them and I’m going to ask them lots of questions or I’m going to make them do lots of times tables worksheets. That’s fine. If your child is happy with doing that, that’s great. My son, last week, was going through a stage where he really didn’t want to do worksheets, he didn’t even want to write the answers so I wrote the questions and then I wrote the answers when he shouted them out to me.
And I’ve got some spellings over here on the whiteboard. You can see my other son’s spellings, so he decides to write those on the board but when we practice spellings, actually we usually practice them in the bathroom and then he writes with the board pen on the shower stall. So you can use that tip or you can even use a window because some kids just like writing somewhere different.
Another great tip is to do them in the car. So this tip came from one of my Thinkster Math parents. So what she does is she gets her child to do Thinkster Math while she’s driving because that way she can hear when the child is getting questions right or wrong. There’s like an audio sound of the Thinkster Math app. If her daughter gets stuck, she can give her some advice. She can say, “Hey, watch the video or read the question again,” but she’s not actually sitting over her and saying, “Do this, this, and this,” because she can’t, she’s driving. So I think in the car is a great location. You’ll probably notice that when you ask your kids a question they’ll often look away while they think of the answer. Also, it’s kind of confrontational if you’re staring at them, “Hey, what’s 8×9?” So try that, try in the car so that there’s less pressure if they get the questions wrong.

Tips for learning the math facts

So if we go back to the beginning:

So for more quick tips and practical advice to help your kids to maths success, go to the Maths Insider website: www.mathsinsider.com.

About The Author: Caroline Mukisa is the founder of Maths Insider. A Cambridge University educated math teacher, she's been involved in math education for over 20 years as a teacher, tutor, Kumon instructor, Thinkster Math instructor and math ed blogger. She is the author of the insanely helpful ebook "The Ultimate Kumon Review" and insanely useful website "31 Days to Faster Times Tables" You can follow her math tips on Facebook and follow her on Twitter @mathsinsider
Share | Tweet | print | email
Categories: High School Resources, Mental maths, Motivation, Primary and Elementary Resources, Resources