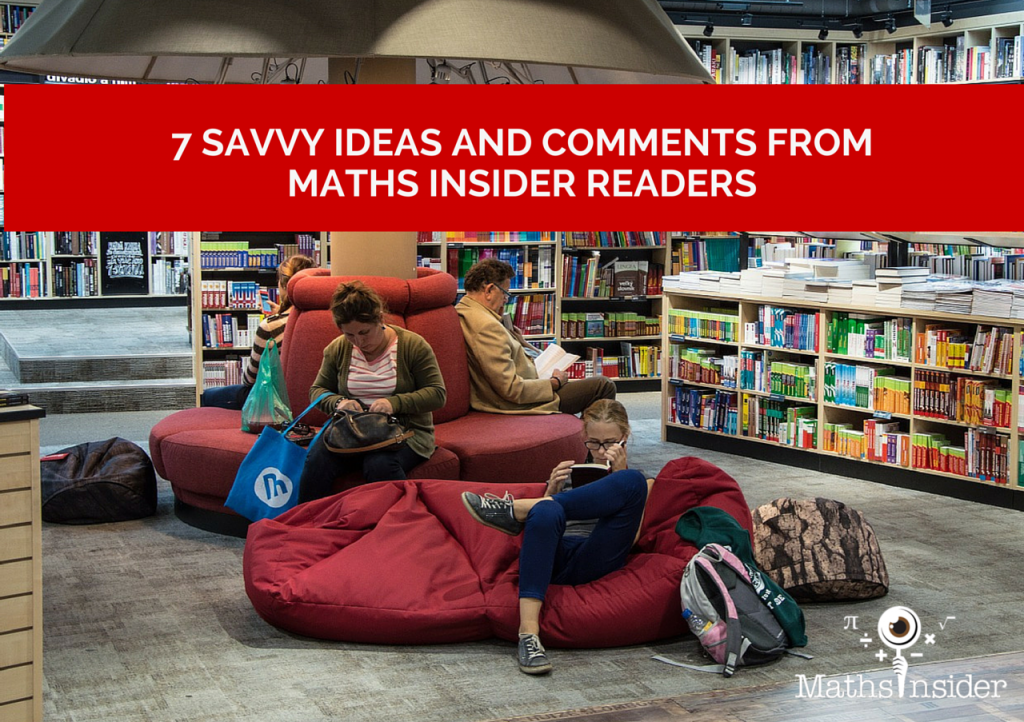 I know quite a lot about maths teaching and learning and I’m passionate about sharing what I know with you – that’s why I set up Maths Insider.

But I don’t know it all.

I sit here in my laboratory called home, researching, testing and listening out for ideas to share, but I certainly don’t know it all!

That’s where you, the Maths Insider readers, have stepped up!

If you want to read through the archive of articles and comments here on Maths Insider, scroll to the bottom of the page and click on each category to access all the posts.

In the meantime, read these 7 savvy ideas that insightful readers have shared on Maths Insider: 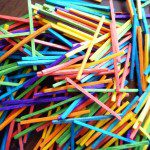 I had never thought before about how it is hard for kids to always be the only ones under scrutiny and making mistakes. I really like how you turned the tables! I recently started doing something similar with one of my own tutoring students–making “math casts” where she is a news anchor giving a broadcast about how to do a certain kind of math problem. And you are right–giving students a chance to teach can be a great way to assess without making them do a worksheet or a test.

I am always on the lookout for fun new ways to teach the multiplication facts, so thank you for sharing these here. I’ve also found singing and rapping the facts to be useful–if you’re interested, I wrote about this is in an article about fun ways to help your kids learn math:
http://mashable.com/2010/06/29/kids-learn-math-online/

in response to Maths-Whizz Testers Needed!

We have been using the programme for 3 months now and I have to say it is fantastic, and I think you have done a great review Caroline.

When I found Maths Whizz I asked my son to do the assessment – he loved it.

If you help your child, or your child messes around then you could end up with tutorial lessons being too hard or too easy, so its important to do the assessment when your child is ready to learn, and not to offer any help (as tempting as it is).

Whizz has a clever way of automatically taking you to your next tutorial lesson and it’s easy for children to be absorbed into doing the lessons to earn points.

With many maths programmes, whether online or via CD, you normally select the year group you want to work on. This means that sometimes the questions are too easy, and others are too hard, both of which can be demotivating and demoralising to a child. With Maths Whizz, you have no control over the level of maths your child does, Whizz sorts this out for you, so you could be working on a Year 5 level for one topic, and maybe a Year 4 for another. These levels are set once the assessment has been completed. But it is not obvious to the user. Maths Ages are given out on the reports but if this is likely to be an issue to your child, you dont need to let them see the reports.

With many maths programmes, children will not select a topic they can’t do or don’t understand. The Whizz maths has a tutorial for every strand of maths that your child will/should encounter at school and they have to complete the lesson before they can move to the next topic. If they struggle, then when this topic reappears it might be an easier lesson. They can’t avoid any topics which I think is really good.

Overall I have been extremely impressed with Whizz Maths. Its motivational and interesting, and I too have learnt so much. If I have had any queries, they are always answered within 48 hours and they always follow up if they cant answer immediately.

I like paid subscription sites so that you do get reports and feedback. If your child is completing games on the free websites you dont always see how they are doing or if they really understand what they are learning. It has been very interesting to observe the range of maths topics available and also my son’s knowledge and understanding.

What has also been interesting is to see the topics develop at each stage. No doubt your children come home and say theyve done maths and it was the same as last year, but through Whizz I have seen how the topic is the same, but advances one step at a time so the children think theyve already done it and got it right, they can do it again.

I would definitely recommend this site! Some very clever programming indeed!

in response to Who else wants their child to be lightening fast at mental maths? – Introduction 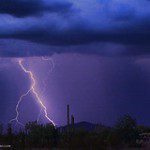 Experts categorise learning styles into 3 but I prefer 4. Speaking/listening (auditory from self and others), reading (visual), writing (kinaesthetic and visual), doing (kinaesthetic or tactile)..

A parent’s/teacher’s awareness and application of the different learning styles can make a huge differenc to a child’s learning. If a child finds it hard to sit still, or write out sums, or repeat drills or read from a chart, maximise on their learning style by giving him/her something to do that helps them internalise the maths involved. This doesn’t mean to say that you should ignore the other learning styles that your child may not be so good at. The best learners are those who are able to learn using all 4 styles -multiple intelligence- and that’s what we all want our children to have.

4) A neat Arithmetic Method from Malyn 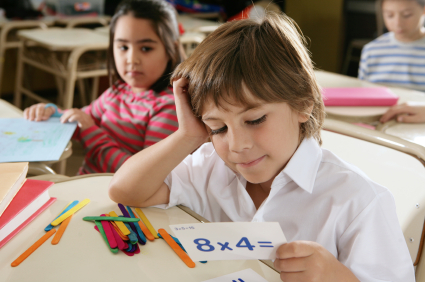 I agree that a working-out strategy is good to have. One I find that really works is to give “goal posts”, for lack of a better term.

So, when stuck, I say use those and move either forward or backward by adding or subtracting. This drills them in addition and subtraction, too. For example, if you don’t know 7×8, you can start from 7×10 and -7 twice. Or, if the kid is struggling with subtraction then start with 7×5 and +7 three more times. Sometimes I even throw in the concept of range – it’ll be between the x5 and x10 result.

in response to Finger counting: The Debate Continues! 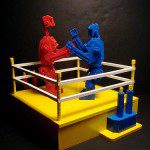 I’ve not had to deal with children finger counting to do arithmetic. At a very early age I taught my son to count in binary on his fingers, a skill I still find useful as an adult when I have to count things (particularly letters or numbers, which can be distracting for oral counting). Animated instructions are available as a Scratch animation

My son was pretty much at grade level for memorizing number facts, though he got the algorithms and number sense much quicker than average. He did use counting-by-n for about a year as a crutch for multiplication, but doing a bunch of multiplication problems in school got him past that, since he prized being the first one done, and counting-by-n was slow.

I used to tutor early-elementary children, and these are two strategies I found helpful for multi-digit addition and subtraction:

Use pennies to represent the ones column and dimes to represent the tens. When carrying or borrowing, exchange a dime for ten pennies. This helps to make the action more obvious and less like a magic trick. After some practice, add dollar coins and work with 3-digit numbers; seeing that the same concepts still apply gives kids a real sense of power.

Practice adding LOTS of numbers in a tall column using “the buddy system”: Every 1-digit number has a 1-digit number that is its “buddy” to add up to 10. Thus, you can approach the tall addition problem by looking down the ones column for buddy pairs, marking them out, and counting the pairs with your other hand, then writing the number of pairs in the tens column; if you reach 10 pairs, write a 1 in the hundreds column. After marking out all the pairs, you have just a few numbers to sum. Then do the tens column the same way.

in response to Who else wants their child to be lightening fast at mental maths? – Introduction

Have you seen Rathmell and Leutzinger’s research on this? It’s aimed at teachers, but it’s really interesting. I’m particularly fond of the use-10 thinking strategies (and then, of course) once master a strategy there’s nothing like practice.

Rathmell’s work is summarized quite nicely in this Q&A if you’re interested:http://thinkingwithnumbers.com/QuestionsAnswers/index.html

I’ve also found that you can disguise a lot of math practice as a game. If you play go-fish, but instead of wanting 4 of a kind, you want a pair of numbers that add to 10, you can get in rather a lot of focused practice without it seeming like too much work. I rather like playing chutes and ladders with 2 10-sided dice to practice the easier subtraction facts (subtract the smaller from the larger number, and that’s how many spaces you go).

Many thanks to the 7 commentators above and to all of you who have taken the time to share your thoughts and ideas here on Maths Insider. Keep up the sharing below!