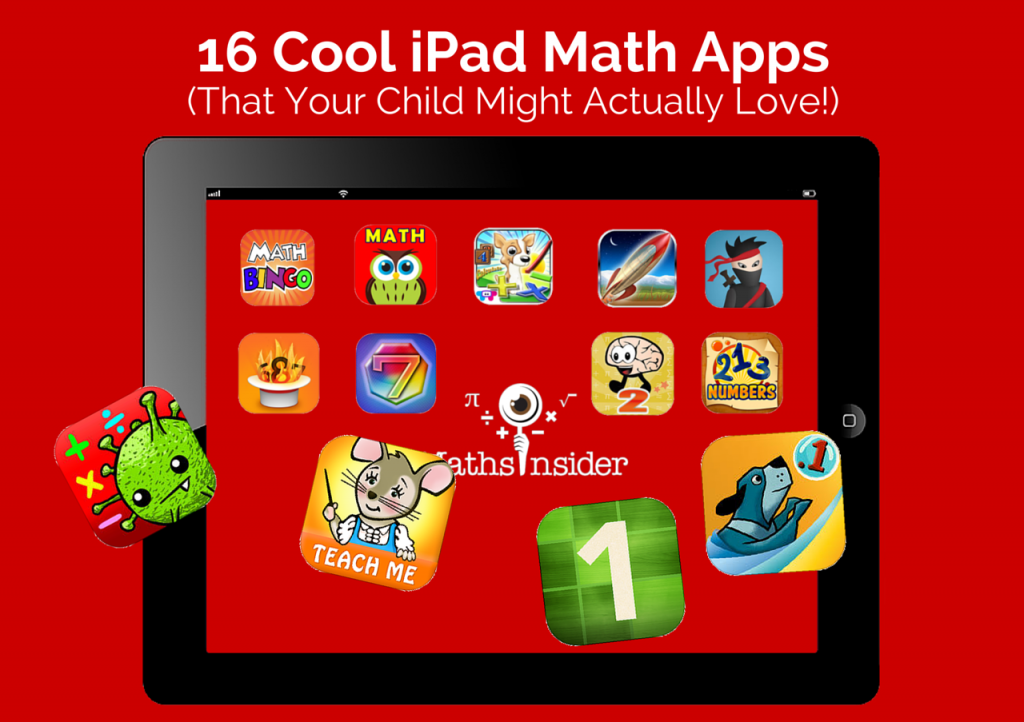 Did you know that there are over 4000 “maths” iPad apps on the market? If you’re a typical iPad owner with kids, it’s almost certain that your children have made it a full time mission to take control of your fragile tablet, firstly by using it at every available opportunity and then by packing it full of wall to wall games. If your iPad is drowning under the weight of mindlessly fun physics games or poor quality educational apps, then check out this list of 16 maths iPad apps that are actually both educational and great fun!

This rocket themed math app appeals to the most basic instinct in kids, which is usually not to learn maths, but is to collect stuff and build stuff. Of course it covers the essential 4 operations but also covers topics such as telling the time, money, shapes and even square roots. Kids get to build a rocket which is powered by a realistic physics engine and launch their rocket into space to answer questions and collect maths objects. Designed for kids aged 4-12 years old, there’s plenty of maths (and rocket building) in this app to keep kids usefully occupied for many hours.

ArithmeTick lacks the cool graphics of other apps, but it’s strangely addictive and gets the job done. This app has 5 difficulty levels from easy to Einstein and gives kids flash card style training for each of the 4 basic operations (addition, subtraction, multiplication, division.) What works well are the timed challenges which offer points and additional time for correct answers. 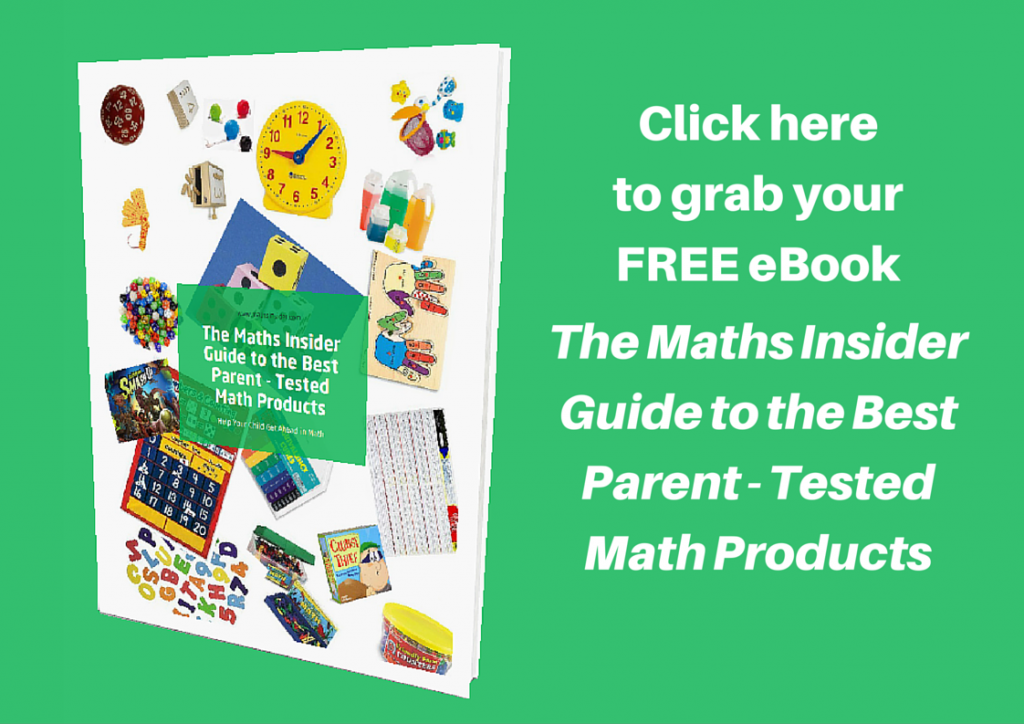 With nearly 2000 4.5 star reviews, this mental maths trainer app is a good choice for older children (and adults) who want to go beyond basic arithmetic and become mathematicians. Presented in a notebook style, with clear explanations of how to perform these mental maths tricks along with a practice mode allowing you to perfect your maths tricks.

A nice maths app for kids aged 3 and up. Kids Ace Math features kid (if not adult) friendly graphics and nice visualizations to help little ones see the visual representations of the 4 basic operations. What’s good about this app is that the settings can be adjusted to your child’s ability allowing the app to grow with your child.

This universal app (purchase once and use on both your iPhone and iPad) can be played in one of 3 difficulty levels, with up to 5 profiles (handy if you have more than on child), using any of the 8 avatars and features bug prizes. The brightly rendered bingo card concept with animated bugs adds a level of interest to this 4 operations game.

A popular maths app with basic graphics, this app is a glam-free way to learn basic math skills in addition, subtraction, multiplication and division. What does work well is that it gives visual representations of the maths problems using number lines, wooden blocks and hints and includes that old favorite, working out the nine-times times tables using your fingers! 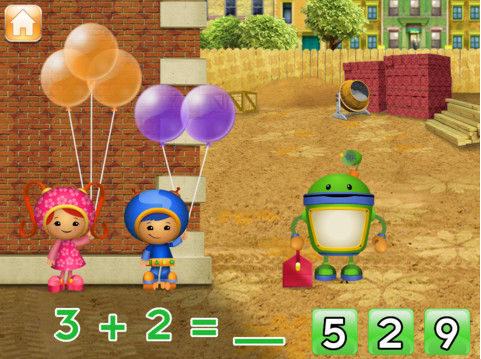 The high quality production of the audio and graphics, as well as the use of Nick Jr’s UmiZoomi characters, explain the high price point of this app. Featuring maths ideas ranging from counting to addition/ subtraction and number lines, this preschool game is a firm favorite with my 3 year old. Games are leveled, and designed to increase in difficulty. Appropriate hints are provided to support your child as they practice and build their maths skills.

This beautifully designed app uses classic Montessori methods to teach maths basics such as number recognition, sequence, and spatial relationships. It even introduces odd and even numbers. Montessori resources such as number rods and sandpaper letters are reinvented for the digital age to provide a rich learning experience for preschoolers. This app also features language support for 7 different languages.

Although  not exclusively a maths app, Teach Me – 1st Grade deserves a mention here for the way it manages to engage children. My 5 year old proclaimed that he didn’t need to go to school after playing with the Kindergarten version of this game over several weeks. Taking advantage of children’s desire to be like grown-up’s and buy things, the various themed stores offer stickers that kids can buy using coins they earn during game play. The handwriting recognition engine helps to reinforce number formation and addition and subtraction are taught from and to 20.

Math Evolve’s graphically rich “Story Mode” mixes the usual 4 operations maths practice with classic arcade-style gameplay, creating a true synergy between learning and play. Players embark on epic math adventure across three unique environments: microscopic, ocean, and space. The app’s “Practice Mode” can be used  to provide customizable math practice. Works on both the iPhone and the iPad with one purchase.

Motion Math Zoom’s zoomable, stretchable number line is missing some numbers – it’s up to your child to put the numbers back where they belong. What works really well is that the game uses concrete objects to represent abstract numbers: from dinosaurs in the thousands down to amoebae in the thousandths. Fun animal animations and sound effects help school children master the number line, and get a real feel for how big (or small) numbers really are. The first 6 levels are free, and a further 18 levels can be accessed with an in-app purchase.

An addictive and simple family number game, Doodle Numbers HD offers plenty of arithmetic practice.  Why spend time mindlessly matching coloured shapes when with this game you can clear the game board by matching numbers based on the rules given at each level. Scoring a consistent 4.5 stars from nearly 1000 reviews, this  app makes arithmetic a fun family activity!

A favorite in our house, it’s easy to dismiss Super 7 as being a simple maths game as the numbered discs slowly float onto the screen. However minutes later as you’re frantically working out addition sums with numbers (including negative numbers), while making sure certain increasingly fast floating discs don’t touch each other, you’ll realize that both your mental maths and your reaction skills have undergone some targeted training. 4.5 stars from over 8000 ratings says it all.

This brain training maths app takes addition, subtraction, multiplication and division questions and turns them into a challenging math game for adults and children. In each of the 5 game modes, players earn “brain cells” as they answer questions. There’s a game center and a multiplayer mode where players can play over the internet.

Combining cool video game play with maths means that kids won’t realize how much math they’re actually doing while playing Math Ninja. You can customize the game to focus on particular operations and number ranges while your child defends themselves against Tomato-San, who is building a robotic army to steal their tasty math treasure!

Which maths iPad apps have worked well for your child? Tell me in the comments below!

For more cool math apps check out the following posts:

The 16 Best iPhone and iPad Math Apps for Preschoolers

7 iPad Apps to Help Your Child Crush Their Times Tables

37 thoughts on “16 Cool iPad Math Apps (That Your Child Might Actually Love!)”